Tadelakt is a waterproof plaster on a lime basis, from the family of the flocked. Used in baths, hammocks, riads can (traditional house with patio) and palaces in Morocco, this is probably the oldest finishing plaster-has existed for 4000 years and has defended all its qualities-technical and aesthetic, through time. Because of the possibilities that this technology gives, it can be called a “universe of shapes and colors” where one of the few limitations is fantasy. Initially, “Tadelakt” was used by the bers as a waterproofing of potable water tanks. There is no written data on its origin. For centuries, the execution of Tadelakt was a craft transmitted orally by a master (the Maalem) to a disciple, each of which had kept his secrets. According to the decorators, there are so many ways of laying tadelakt as masters. The name derives from the Arabic verb “dellek”, which means caressing, mildle. This “Miling” is the last ending stage of the tabadelact, when the plaster is polished and impregnated with flat stone and black soap dissolved in water. With the advent of industrial construction, in the Fifties of the 20th century, this magic technique almost disappears. The interest of the western world towards Morocco and its traditions and culture in the mid-80 years of the 20th century has re-put it into the world. 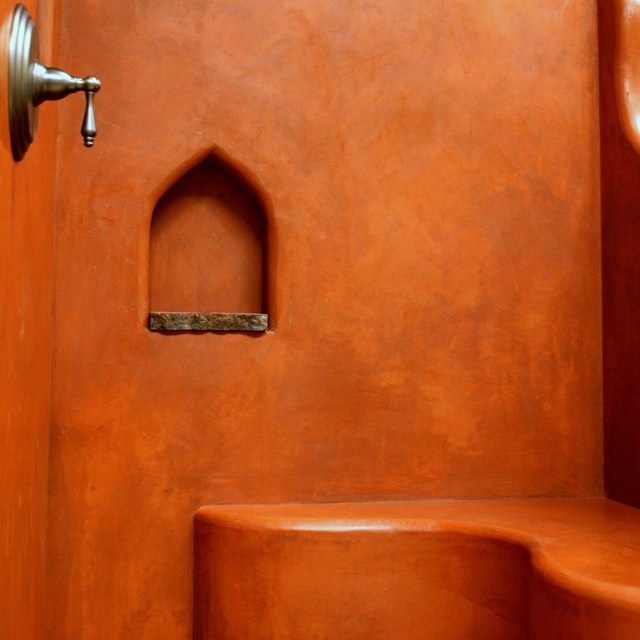 The peculiar charm of tabadelact is unconditional. The word that is most often used to define it is “sensuality”. Unlike other polished plasters, the execution of tabdelact is not standard, precise and on a perfectly flat base. The peculiarities of the application leave the surface slightly wavy, vivid, which emphasizes the hand-made, without it being visibly sought effect, with only decorative function. Sculpted soft shapes and pastel, vibrating tones create an atmosphere of natural, unassuming sophistication. During drying, light micro-cracks are formed, which are the “signature” of the tagadelact of authenticity and, according to the Puritans, a basic aesthetic advantage over acrylic alternatives. These micro-cracks (often barely noticeable) do not disturb its hydrophobic properties, i.e. are sealed very well in the polishing with black soap and particles of plaster.

The color is in the plaster itself. Conditionally we can divide the palette of two-traditionally used colors in Morocco and all the others. Morocco is known as the Kingdom of the Ochrite. From the brown ocher through the Havana, Orange, amber, red-the range is very rich, and all the colors are an echo of the beauty of the Moroccan landscape: The brick is the color of Marrakech, the pink-red is from the cities in the south like Tafrut, the ocher are the color of the Atlas Mountains , the red are the walls of Esuejra and Fez, the Orange are the dunes of ceebbi, white-white Tangier and the blue-blue of Majorela. Like all lime plasters, the final color loses to 30-50 from its intensity in the drying compared to the color of the prepared mixture. In addition, the humidity and temperature of the wall and the air are important, the base on which the drying rate is applied. All water-soluble colorants are compatible, as the mass of the pigment should not be more than 15 of the total mass of the plaster.

Tadelakt is a cover suitable for all types of wet rooms, baths, saunas, hammams, bathtubs, sinks, shower spaces, etc. The steam and water on the tagdelact, strengthen its mineral structure, emphasize its capillaries and accentuate the color, which, together with The rounded forms create a relaxing, intimate environment and make it suitable for relaxation and SPA treatments such as steam baths, saunas, hydromassages. Its property to obey the colors and shapes allows it to adapt equally well to any interiors-classic and modern. It can be used in different rooms or as an accent for individual architectural elements-columns, fireplaces, bookcases, plinths, countertops. It can be applied directly to the pavement structure (a hedge of mud), which, together with its ancient appearance, is an excellent alternative to restoring old houses.

Tabdelact is more than decorative plaster, it heals and renovates the walls. The high PH of the lime makes it fungicidal and antibacterial. This plaster breathes and protects the wall from condensation, moisture and all their consequences. The fact that it is solid and microporous material gives the tagadelact very good isothermal and sound insulating properties. It is obligatory to apply on a breathable basis (not on gypsum and concrete without preparation). The ideal base is a choral plaster. It is also very well applied to aerated concrete (, etc.), wood and all porous foundations (without gypsum). Relative strength plaster acquires on the 28th day after laying. Areas not exposed to direct wetting can be used 3-4 days after it is made. For shower cabins and sinks – 14 days, and for baths and swimming pools-a month. This period may be extended depending on humidity and temperature. In the authentic Arab technology, tabdelact is made with lime harvested in the Marrakech region. This lime allows the application of a thick layer thanks to its specific mineral composition and the “primitive” receiving technology. The unroasted and toasted parts serve as a filler, which makes this lime ready plaster. The refined lime we have in Europe can be adapted very successfully for the realization of tadelakt, using suitable additives such as marble powder, talc, talc from Moudon, fine limestone sand and observe the technology.

The man who has just discovered the fire, notices that some of the stones he uses to build the hearth are decomposed by temperature, then connected under the influence of water, and eventually they are progressively hardened by the contact with the air. Thus the lime is born-natural from the four main elements-land, fire, water and air. The first traces of the use of lime are still in prehistory in modern-day Turkey and Iran. Of the VI century BC All civilizations know the lime Mesopotamian, America, Babylon, China, Persia… Later, Greece and Rome made the lime an essential element of its architecture. The Romans, adding volcanic ash and dust from volcanic rocks (puzzolane), naturally improve the mechanical properties of the lime-its resistance to weather influences and salts, while retaining its hydro-insulating properties. This new substance allows them to build bridges, viaducts, reservoirs, roads, public buildings, etc. The new architecture is born. At the same time, the Mediterranean peoples also used lime for plaster, decoration, painting and ornaments. In the Middle Ages it remained a major element in the construction and finishing plasters. The fresco appears. Between 17 and 18c. The main studies are in the field of baking and extinguishing of lime, which end in 1824. When the first Portland cement was produced.

The lime is obtained by firing a very clean limestone scale with a content of CaCO3 minimum of 50 at a temperature of about 825 ° с. As a result, it loses its CO2 and we get the so-called Cao quicklime. The extinguishing of the lime is the passage of the unextinguished lime into the slaked through the phenomenon of hydration, as a result of which its volumetric mass increases due to a change in molecular structure in the formation of Saon2-calcium hydroxide. There are several methods of extinguishing, the most important is the amount of water, so as not to “drown” or “burn” lime. In contact with carbon dioxide in the air begins the last process, in which the lime loses its 2 group and again turns into a limestone stone-carbonization-a specific chemical reaction of lime. The realization of Stuko and Tadelakt is very closely related to this phenomenon. Once the reaction of calcium hydroxide with carbon dioxide has begun, a very fine film of calcium carbonate crystals is formed on the surface – this is the process we call carbonization. This process can run for hours or months. It depends on the composition of the plaster, its thickness, temperature and humidity of the base and air. The art and “mastery” of the Stoucoto and Tabdelact is the exact intervention during carbonization. This intervention should be at a specific time, because of it depends gloss, smooth surface and to some extent hydrophofness.

The application of the soap is the last, but also a significant step in the laying of Tadelakt. Soap is natural, entirely from natural products with the main ingredient-pure olive oil. Liquid-with dark amber color and distinctive aroma. Traditionally used for massage in the Baths/hammocks in Morocco, as well as for the “protection” of the traditional Moroccan lime plaster Tadelakt.

The soap is applied several times on the entire surface of the plaster, so that it penetrates well and impregnates it. His action is in two directions. Provides waterproofing and makes the color brighter. On the one hand, in the interaction of soap with lime, an oily molecule is formed, thanks to which the surface becomes waterproof and on the other, the olive oil itself not only emphasizes the color, but just as well acts as a hydro-insulating agent.

“Morgcan soap” is renowned for its exfocal and moisturizing property. A key part of the ritual of “Turkish bath – Hamam” is when the soap is rubbed vigorously on the body with a glove or loofah. Rinse and leave the skin smooth and supple. It follows a towel wrap and a stay in the steam room. The ritual ends with a relaxing period in the cooling room.

Tadelakt is sensitive to acids and preparations against scale stone. Despite its strength, the impact of a hard or sharp object hurts. It can be repaired, but almost always a certain color difference remains.

It is enough once in 5-6 months to wash with black soap dissolved in water (a tablespoon of soap per 4-5 liters of water). Black soap feeds, cleans, impregnates and imparts a glow to the tabadelact. Wash only with soap (preferably plant-based) and water.

As we have already mentioned, Tadelakt can be called “a universe of shapes and colors” where one of the few limitations is fantasy. The plaster can be applied to surfaces with different shapes-such as pre-built of suitable material (plasterboard, etc.) sinks, bathtubs, shower cabins, etc. It is performed with rounded edges, which brings a distinctive softness and hospitality in the interior and exterior. The plaster heals and renovates the walls. It breathes and protects the wall from condensation, moisture and all their consequences. The high PH of the lime makes it fungicidal and antibacterial. There are many good isothermal and noise insulating properties. It runs without joints. Easy Maintenance.

Lively, natural, craft material with rich history, numerous advantages and opportunities – a matter of creativity, creativity and craftsmanship. With Tadelakt you have the opportunity to turn spaces into art.